Recently my refrigerator went down and had to be replaced. The new was deeper than the old. Once in place, the new frig 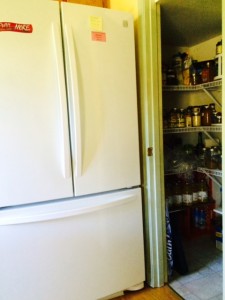 would prevent the pantry door from opening. I got the men to remove the pantry door. OMG, I forgot that the back of the door had a 6 self storage unit on it filled with food. That one move required a total redesign for the pantry. It meant eliminating so much: unused spices, cans of unusual stuff I had not used in years….

Next came the realization I have more than enough. In fact, I have TOO MUCH. Time to dredge the depths of closets, drawers, the storage places and remove “stuff” clogging up the areas.

Once the pantry was done, what about the other parts of the kitchen? The coat closet? The dresser drawers. etc.,etc.,etc.

Now I have 20 grocery bags full of stuff to be repurposed to others, sold, or donated.

And even after that, there’s so much left!

The teacher needs to be practicing what he preaches!

My wish? Those who enjoy what I coach would allow me to help them. You may know I recently ran a series of webinars and free teleconferences. They were singularly unsuccessful, and what follows was typical when I surveyed folks as to what was wanted, needed and what they would do about it.

Clients wanted me to give Feng Shui cures for their home. But the home was full of very confused energy, due to the owner’s multifaceted interests and pursuits. They felt if I gave them some Feng Shui cures, all the confusion would dissipate and their life would change. If we were in the kitchen, they wanted the finished dinner and I, as their cook, would provide it. What didn’t they see? Certain things would have to happen and happen in a certain order before dinner could appear. They could’t expect a calm, serene, and nourishing home (or ‘dinner’ of the example) until they became willing to clean out the clutter. Once done, clarity would become evident, or at least visible.

However, the clients would not, could not, face the challenge. Instead they wanted a device, or an object, or an arrangement, that would give them their desired result.  I don’t have a magic wand, I have a very useful tool kit. I can help facilitate, coach, offer tools that work, but I don’t have a magic wand. More importantly, Feng Shui is an art and a science, when used properly, harmonize the person(s) and their environment.

They did not seem to be in touch with the fact we co-create.

My point? If we want change, we have to be willing to do something different. Just as getting a new refrigerator showed me that I needed to clean out my space, sometimes what isn’t obvious at first has been staring me in the face for a long time! Who, in this materialistic consumer society of ours, couldn’t use greater clarity? Being swamped with all our material goods, we don’t see that we can do it, and do it together is far easier!

Once cleared out, the next steps appear. That’s part of the magic!

Sugeet is a delight to work with! I enjoyed how he listened to me, learned about what would fit my lifestyle without having to change my home or business. That...