It is said the Buddha asked all the animals to gather with him on Chinese New Year (January 26 this year.)  Only 12 showed up and he gave a month to each animal.  This year is the year of the Ox.  People born in the Year of the Ox are loyal, steadfast, hard working and stable. 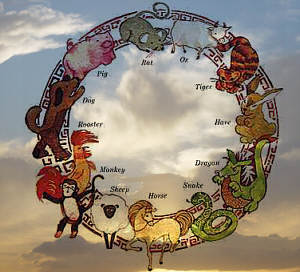 In the Rogue Valley, Jacksonville is the center of activity as there was a huge Chinese population during the gold rush days. It did not last, as the Chinese were forcibly sent back when I became illegal for a Chinese to live in OR.

But February 5 will see an entire day of activities celebrating the Year of the Ox.  For a full schedule, see http://www.mailtribune.com/apps/pbcs.dll/article?AID=/20090130/TEMPO/901300307.  And outside the area, see if there is a local Chinese Association that will know what’s happening at this auspicious time of the year. Gung Hay Fat Choi!

If you’d like to hear more about how Feng Shui can possibly make these difficult times pass a bit easier, Sugeet is appearing this Sunday on Jefferson Public Radio’s World Vision.  Colleen Pyke, long time radio personality is the host.

The program airs at 5pm Sunday, February 1 on the AM outlet – 1230 on the dial.  Sandwiched between Zorba Paster on Your Health and The People’s Pharmacy it’s doubtful this program will cure any rashes, but it just might give you a clearer view how to make life a bit easier.

For those not in the Jefferson listening area (Talent, Medford, Grants Pass, Roseburg, Eugene, Mt Shasta, Mendocino, Eureka and Redding) the program will be streaming on www3.ijpr.org  click on the News and Information channel, then choose ‘Listen Live‘ and you’ll receive it.

Missed it? Not to worry, soon it will be archived here.  And your comments are always welcome.

You just saw my posting about lucky charms for 2009, but here’s something that has the hair standing up on my neck.

Take a look at this photo and see if you don’t see what I do: 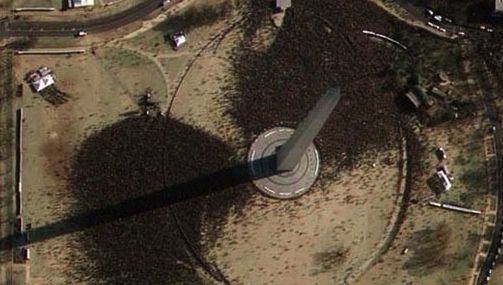 This photo was taken on Inauguration Day less than one hour before President Obama was sworn in on the steps of the Capitol.  Taken by the GeoSat satellite, it looks amazingly like the Yin/Yang symbol to me.  That ancient symbol represents balance – male/female, night/day.  Seems to me that President Obama has made it a point to seek balance in trying to extricate ourselves from the hydra headed mess the former President left.

Here’s a link to a story recently published inthe Phillipines.

I find this article illustrative of how much the Orient has altered Feng Shui into charms and spells and away from patient observation and intuitive sensing energies.  Yet this aspect of some folk’s practice of Feng Shui does not mention one point – and that is what you believe in can manifest. The power of intention is discounted in American culture, but it is real and it is powerful. So if your gig is to beleive in crystals, power on.

But for those who pick up info like this, go of and buy some crytals and think their life is going to change – well, not too likely.

Many readers have asked me questions about topics that I covered in the eZine, or wondered what I had to say about.. .color, fans, etc.  The Resource Blog answers that and more.  You can search for whatever I have written about at any time and print out whatever is useful to you.

I’ll be growing this blog, adding the newspaper columns I’ve authored, and archiving past eZines.  In addition, as my understanding of how Feng Shui relates to other fields of endeavor, I’ll be developing material on that as well.  Then I’ll categorize it so that it’s easy to find and easy to use.

In addition, I invite you, dear reader, to add your comments and questions, so that a real dialogue can happen between us.  If you have problems or questions, don’t hesitate to add those and I’ll try to address them as quickly as time allows.

Dear Sugeet,
There’s been a real pleasure working with you over the years on our house design projects.
In the midst of our planning stages, we attempted to read books about Feng...